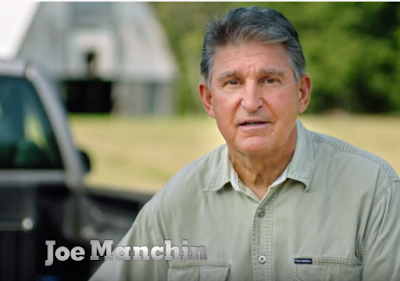 "You know who is the most racisty racisty racist in America right now according to Democrats? That would be one Democrat Senator Joe Manchin, who just drove a stake through the heart of Democrat dreams to make the District of Columbia a State.

"Making D.C. a state would be unconstitutional, even with an attempt to carve D.C. into pieces and make one piece a state. So unconstitutional even John Roberts might switch sides and join the conservatives on the high court. But nonetheless, Democrats wanted to go there, perhaps hoping more threats from Chuck Schumer and Sheldon Whitehouse to go all insurrectionist against SCOTUS would work.

"But in order for it even to be in play legislatively, Democrats would need to bust the filibuster AND get all Democrat Senators plus the Vice President to vote for it. Joe Manchin has said he’s not busting the legislative filibuster, and today he said he’s also not voting to make D.C. a state, arguing that a constitutional amendment would be needed for that." . . .

"
Edwin Hollins: What an idiot. ...Manchin is a racis
t fool."
Joe Manchin Puts the Kibosh on Democrats' Latest Hopes and Dreams  "With the 50-50 split we currently have to endure in the Senate, Republicans are once again having to rely on a select few Democrats to remain somewhat sane. That has boiled down to Kyrsten Sinema and Joe Manchin becoming the bulwark against all sorts of left-wing hopes and dreams, with the most visible one being the filibuster that requires 60 votes on most legislative items." . . .

Manchin is also correct that it would require a constitutional amendment. It’s actually one of the clearest things the founders laid out in writing, i.e. that the federal district must not be a state.