The Times of London 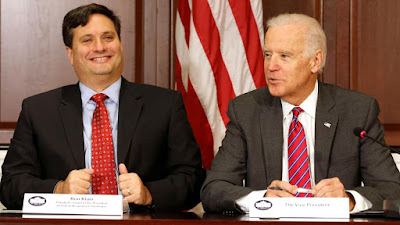 Ron Klain is determined to secure Biden’s place in the pantheon of presidents,
with Roosevelt and Johnson
"The name’s Klain — President Klain. Washington insiders delight in assigning the White House chief of staff this mischievous title as the driving force behind the actual president, Joe Biden. The man himself, Ron Klain, would never describe himself this way, but his firm grip on the levers of government has enabled the 78-year-old president to cruise through his first 100 days in office without breaking sweat.
"Everybody who is anybody in Washington knows Klain, although few people outside the Beltway — the ring road surrounding the capital — have heard of him. He is a powerful, confident operator who knows the business of government inside out. Trusted to exercise power and take decisions, he keeps his boss informed while lifting the burden of office from him.
"Klain, 59, has recently emerged from the shadows as the surprising face of the administration on Twitter, where he touts Biden’s achievements with gusto under the handle @WHCOS, for White House chief of staff. His output is very different in style to Donald Trump’s but equally triumphal. Among his latest tweets was a Reuters/Ipsos poll showing 55 per cent of Americans approved of Biden’s job performance, as opposed to 38 per cent who disapproved. He also highlighted a Washington Post article headlined: “No wonder the president has a bounce in his step.” . . .