Picture of Senator Barack Obama Failing to Salute the Flag While Others on a Platform, Including Senator Hillary Clinton, are Saluting-Truth!
Summary of the eRumor:  "A picture of Senator Barack Obama (below), Governor Bill Richardson of New Mexico, Senator Hillary Clinton, and one other person all on a platform and backed by an American flag.  The eRumor says that the National Anthem was being played at the time and that all but Senator Obama saluted." 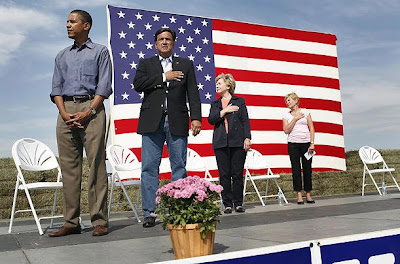 "The picture is authentic.  It was published in Time magazine and was taken 9/16/07 at an event in Indianola, Iowa where six Democratic presidential candidates appeared.  It was Iowa Senator Tom Harkin's annual "meat and greet."   The fourth person in the picture is Senator Harkin's wife, Ruth.  Not seen in the picture are three other candidates who were standing out of view on the right side of the platform, Senator Chris Dodd, Senator John Edwards, Senator Joe Biden.

"At question is what was going on with Senator Obama?   His critics are circulating the picture and saying that he is not respecting the flag or the National Anthem, especially since the protocol, according to the United States Flag code, is that civilians should have their right hands over their hearts and that they should be facing the flag.  His supporters are saying that this little lapse should not be held against him since there have been plenty of other events at which he has saluted the flag---so it did not mean that he would, in principle, avoid doing it.
....
"An ABC News video, however, shows that Senator Obama did not salute at any time during the Anthem and that everybody else on the platform did.
A spokesperson for the Senator told Fox News that it was ridiculous to suggest that Obama was making any kind of a statement and that sometimes "he does and sometimes he doesn't place his hand over his heart during the National Anthem." "
From TruthOrFiction.Com