http://www.nationalreview.com/slideshows/364286?slide=7
Silvio Canto, Jr.: Why my late, great uncle loved the Gettysburg Address   ..."My guess is that he'd really enjoy the upcoming Ken Burns' documentary on the speech.
"He would also have a hard time understanding President Obama's absence for the 150th anniversary.
"My great uncle would ask:   "What else is more important"?"

President Woodrow Wilson (third from right) attends a 50th anniversary
commencement ceremony in 1913.
Wall Street Journal: From 'Four Score' to 'Yes We Can!'  "Barack Obama is not scheduled to be present at Gettysburg on Tuesday to commemorate the 150th anniversary of the address. Maybe he figured that the world would little note, nor long remember, what he said there. Maybe he thought the comparisons with the original were bound to be invidious, and rightly so.
"If that's the case, it would be the beginning of wisdom for this presidency. Better late than never."

President Obama’s Historic Gettysburg Slight  "To compound the mystery is the way the snub was delivered. Rather than make the announcement of his decision not to attend the festivities from the White House, he left that distasteful task to the National Park Service, the federal agency that administers the Gettysburg National Military Park.
....
"The president is scheduled to speak that day at the annual meeting of the Wall Street Journal CEO Council in Washington, D.C., so it’s not like he’s indisposed otherwise. The fact that he would prefer to speak to a bunch of rich white guys rather than appear at an historic setting with the hoi polloi only adds to the unfathomable nature of the snub."  The President's schedule today

Don't you find it a bit vicious that the President is represented by someone from the NPS, which spent millions barricading all national monuments, ensuring the shutdown inflicted as much pain as possible?

Obama Leaves ‘Under God’ Out of Gettysburg Address  "President Obama has elected to skip today’s commemoration of the 150th anniversary of President Abraham Lincoln’s Gettysburg Address. But he participated in video readings of the address for a Ken Burns project. Along with 61 other lawmaker and celebrity participants, Obama read the address on camera from a teleprompter. But unlike the other participants, all of whom recited the entire address, Chris Plante noticed that Barack Obama left out two words: “Under God.' ”

"Obama leaves out “under God” at about the 1:35 mark, in the line “that this nation, under God, shall have a new birth of freedom.' ”


Carney Can’t Explain Why Obama Is Skipping Gettysburg Address Memorial, Locals “Stunned” By Decision Not To Attend…  "You can pretty much guarantee if this was prior to the 2012 election he would attend." Via Fox News:
Salena Zito of The Pittsburgh Tribune-Review said on “The Kelly File” that she has spoken with Gettysburg residents of all political affiliations who are “incredibly disappointed” over Obama’s decision to send Interior Secretary Sally Jewell to represent his administration instead of attending himself.
“They are just stunned by his decision not to attend the Gettysburg Address, it’s the 150th anniversary, it’s one of the most pivotal speeches in our nation’s history…” she said.

Pfeiffer: Obama Too Busy for Gettysburg Anniversary Because of 'Whole Website Thing'  "Barack Obama adviser Dan Pfeiffer says the president won't be attending the Gettysburg address anniversary today because the "whole website thing." He appears to be talking about the ongoing problems with the Obamacare website, Healthcare.gov."


@pfeiffer44 @jmartNYT @jfsolnet Serious question: What is on his schedule that is more important than Gettysburg anniversary?

@ron_fournier @jmartNYT @jfsolnet Oh, I don't know, there's this whole website thing that someone suggested might destroy the Dem Party 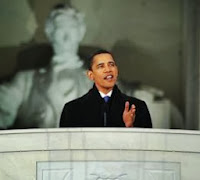 Why Obama Is Blowing Off Gettysburg Address ..."Obama used to love comparing himself to Lincoln so much that he explicitly denied doing it."
....
"No failure is as astounding as America’s inability to see through the fog of media promotion to what Obama is and has always been. But people are starting to catch on at last. Obama is well-advised to avoid standing in the shadows of his betters."